SCT'61
Trevor Leach Memorial Collection
This gallery is dedicated to the memory of Trevor Leach was passed away at the end of 2019.

Trevor was born in Leeds in 1947, and on leaving school he gained employment with an Austin motor dealership in the city. A little while later, after passing the Civil Service Examination, Trevor pursued a career in telecommunications with Post Office Telephones, which later became Post Office Telecommunications. In due course this became British Telecom (BT) where Trevor was an Estates Manager for many years.

He became interested in buses and trams at an early age and in particular the trams of Leeds CT, and the buses and coaches of the West Yorkshire Road Car Co. Ltd. When the last Leeds trams were withdrawn in 1959, Trevor then developed a lifelong interest and study of West Yorkshires vehicles, depots and operations. Trevors interest in West Yorkshire led to membership of the West Yorkshire Information Service (established in 1951) which collated and distributed news on all aspects of the Companys operations by means of a monthly newsletter/bulletin. He became its editor in 1967, and held the post until the difficult decision was taken to wind the Service up in spring 2012. Trevor was also responsible for setting up the WYIS website in January 2003.

Trevor was well known and much respected in bus enthusiast circles, and he and his wife Shirley were also regular participants on the bus and coach preservation circuit. Trevor was an absolute mine of information relating to West Yorkshire, as well as Bristol Commercial Vehicles and Eastern Coachworks, and he also published several books: Trams and Buses of Keighley in Old Photographs; The History of Keighley-West Yorkshire Services Ltd; Twopenny Single to Starbeck  Early public transport in the Harrogate area. In later years the WYIS also offered a photographs by post service and Shirley did a sterling job in maintaining this. 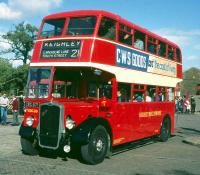 Photo by the late Colin Humphreys
Over the years Trevor was also responsible for the preservation of two buses, and both were restored and maintained to a very high standard. The first was Keighley-West Yorkshire KDG26 (CWX671), a Bristol K5G originally fitted with ECW L27/26R bodywork when delivered new in December 1938 as K383. The chassis was fully refurbished by West Yorkshire in 1950 and received a new Roe L27/28R body the same year. It was renumbered KDG26 in April 1954. It was withdrawn from service in December 1962 and purchased for preservation by enthusiast Keith Jenkinson in early 1963. Trevor and Keith became joint owners in 1966, with Trevor becoming sole owner in 1973 and continuing to restore, maintain and rally KDG26 each year until 1993. 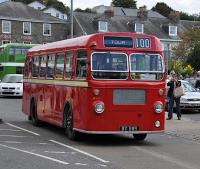 Following KDG26s acquisition by Giles Fearnley and Stuart Wilde, Trevors next venture was to purchase and restore West Yorkshire SMA5 (811BWR), a Bristol SUL4A with ECW B36F bodywork delivered new to the Company in November 1962. SMA5 spent its West Yorkshire life working from York and Malton depots before being withdrawn in November 1972. Following further service with Wolfreton School, Hull and BP Chemicals, Hull, and then a spell with William Staniforth, Birmingham, SMA5 returned north in 1993 to preservationist Ian Hunter in Leeds. Later that year it passed into the care of Trevor, his father and two friends, with Trevor later becoming SMA5s sole owner.

As well as his passenger transport interests, Trevor was also a very competent DIY enthusiast, and also enjoyed walking, cycling and holidaying with his wife and family. He took early retirement in 2000, in order to spend more time with his family, and pursue his hobbies and interests.

Trevor sadly died from cancer on 28th December 2019 and leaves a wife Shirley, daughter Susan and two grandchildren. He was a very approachable, genuine, knowledgeable and interesting man, who also happened to be one of lifes true gentlemen.
West Yorkshire Road Car/WYIS Collection photos posted on the site by Trevor

©2020 SCT61 Pages. All Rights Reserved.
You're welcome to print these pages for personal use or to link to them as long as its not for financial gain. Photos may not be re-posted anywhere (including facebook, flickr and fotopic sites) without permission. See the site map for further details. See our cookie policy.